Before you continue, please understand that:

Prepare Your USCIS Form I-130 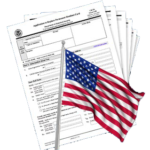 Prepare Your USCIS Form I-130 Family Based Green Card

By the way, here’s something you should know before using our serviceIF YOU HAVEN’T NOTICED YET, WE ARE NOT A LAW FIRM AND ARE NOT AFFILIATED WITH ANY GOVERNMENT AGENCY. WE ARE A PRIVATELY OWNED WEBSITE PROVIDING EASY, SELF HELP ONLINE IMMIGRATION SOLUTIONS. PURCHASE PRICE DOES NOT INCLUDE GOVERNMENT FILING FEES. BLANK FORMS ARE AVAILABLE WITH INSTRUCTIONS FOR FREE FROM THE USCIS. Our software was built by immigration professionals and currently used by immigration attorneys. We pride ourselves in running the latest technology to make the immigration application process easy and secure. Our teams spend hundreds of hours every week improving how our systems work to make your experience the best it can be on any device. CUSTOMER SERVICE AGENTS ARE NOT LAWYERS AND WILL ONLY ANSWER QUESTIONS REGARDING BILLING OR OUR SOFTWARE. We’re sure the USCIS tries really hard to make the immigration process easier for you, we’re just here to do it better. The choice is yours!

What are the government fees to apply for a Green Card for children?

Parents who can file Form I-130 include adoptive parents and stepparents, with USCIS requiring the submittal of different document types to show each relationship. USCIS document requirements also depend upon whether it is the natural mother or the father who petitions, as well as whether a petitioning father was married to the child’s mother when the child was born, and if not, whether the father officially recognized the relationship with the child prior to the child’s 18th birthday.

What are the requirements for a child’s immigration?

If your child is not married, younger than 21 and has permission from USCIS to be temporarily inside the U.S., then they can file Form I-485, Application to Register Permanent Residence or Adjust Status along with your Form I-130. Form I-485 is the application for a Green Card. Filing immigration petitions and applications together is called “concurrent filing.” The children of citizens can do this because visas are always available for the immediate relatives of U.S. citizens.

If your child lives outside the U.S. when their Form I-130 is approved, then the National Visa Center (NVC) will send the child’s local U.S. consulate or embassy your immigration petition and your child’s visa number. This process is called “consular processing.” The local agency will advise your child to visit the agency to complete consular processing.

How do other categories of children apply for permanent residency?

“Other children” include the married children and children older than 21 of U.S. citizens, along with Green Card holders’ children of any age or marital status. Most of these children may apply to immigrate after the USCIS approves their parent’s Form I-130 petition. There may be a wait for a visa number because the U.S. limits the number of visas given to children in these categories each year.

However, children named on their parent’s Green Card approval notice may be eligible to receive a Green Card after the parent properly files with the child’s local U.S. embassy or consulate Form I-824, Application for Action on an Approved Application or Petition. This notifies the consulate that the USCIS recently admitted you to the U.S. as a permanent resident on an immigrant visa, and your children will “accompany” or “follow to join.”

What happens after my child receives a visa number?

How long does it take for a child to immigrate to the U.S.?

If a child is listed on a parent’s Green Card application, immigration occurs at the same time. However, children immigrating after their parent has come to the U.S. may have to wait for a time before they can enter the country. It may take six months or more for a child’s I-130 application to be approved by the USCIS.